Light Repair Team #4 is a light reflection puzzle game for the HTC Vive Virtual Reality Headset. You play as a light pipe repair person, mending the light based power system  to restore power to nearby buildings. When I first got a developer version of the HTC Vive, I wanted to make a game that used the full potential of roomscale Virtual Reality. To start the design process, I looked at classic puzzle styles. Not necessarily their games, but the types of puzzles that were popular. I settled on light mixing/matching puzzle games as good candidate for roomscale VR. It was a style that could be applied to 3 dimensional play, it had a sense of physicality to it (you had to have steady hands for aiming, good hand eye/coordination) and had the potential for some depth.

The gameplay goal of each puzzle is simple. There are a set amount of colored lasers in each puzzle, and colored receivers. The player has to, within their roomscale space, use the provided mirrors, lenses and prisms to bounce, combine or split the colored lasers so that each of the receivers has a matching color shining onto it. There are currently 30 puzzles in the game, with increasing difficulty. Mechanics are introduced and taught gradually in the game itself, by user experience. There is no tutorial section, or dialogue explaining how each mechanic works. Mechanic usage is taught to the player via interaction with the puzzle.

I created and designed each of the unique environments for Light Repair Team #4. The game is set in various parts of a city named New Corona. Upon completing a puzzle, the buildings around the player light up with the newly restored power.

Light Repair Team #4 was an HTC Vive Launch Title and can be purchased on steam for $7.99. 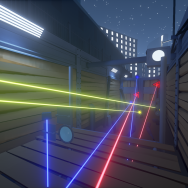 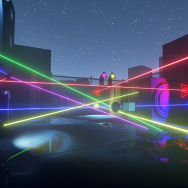 One thought on “Light Repair Team #4”